The Coolest Cardboard House EVER! 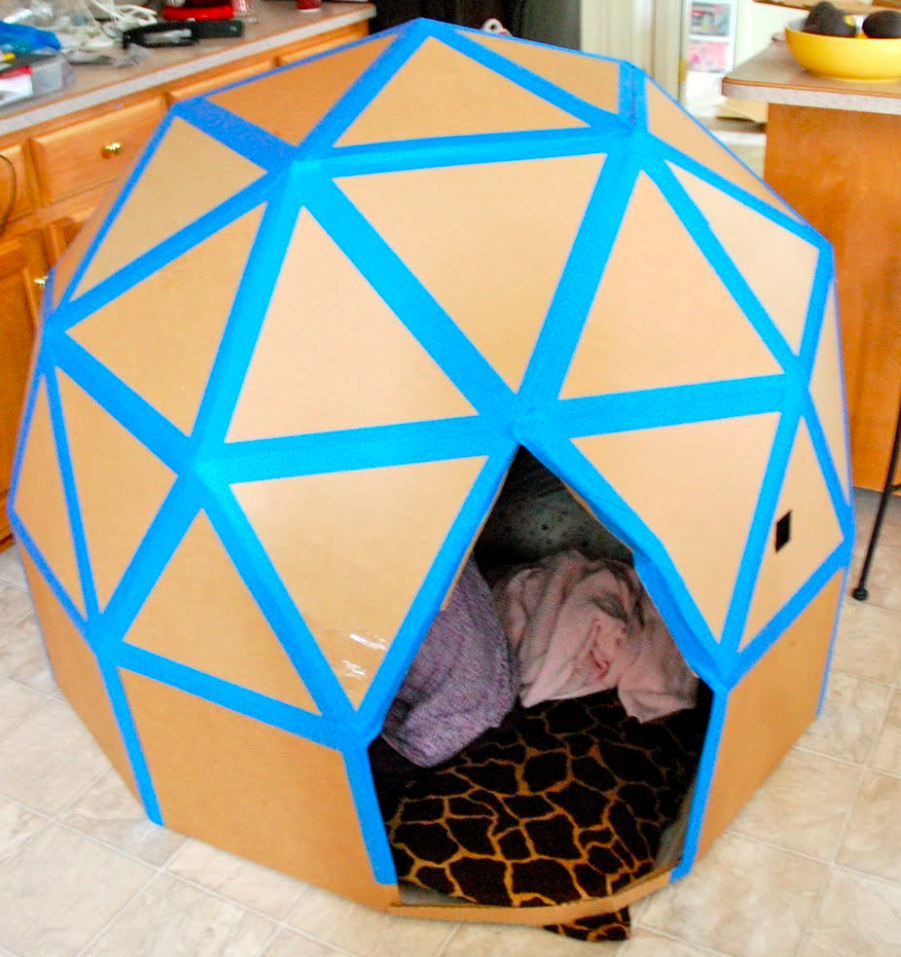 via: hannahandlily.blogspot.com
Please please please ignore the ugly, messy counter. Puh-LEEZ? As I mentioned in yesterday’s post, we (meaning “Brien”, of course–although I did help a little…) made the girls a cardboard house this weekend. As I also mentioned, we had piles of cardboard lying around, having been saved from our IKEA entertainment center. I think the plan had been to build a house using rectangles and squares, but nothing had been set in stone. And then, having tucked the cardboard into the guest room, we rather forgot about it until we had guests last week. Oops! As fate would have it, just as B was needing to get a plan together, he received his daily Instrcutables email and included was a model of a house similar to this. PERFECT! The original instructable can be found here, and the calculator Brien used is here. Be aware, should you decide to use the instrucable and the calculator, the lady mixed up her “A’s” and “B’s” from the calculator, causing B a wee smidge of heartache. He used his big ol’ brain (seriously, that is one smart melon that boy has!) and determined the size of the triangles we would need as well as how many, created a template (allowing for a one inch fold on each side) and went to work. I know it’s hard to see, but there are loads of triangles on this piece of cardboard (and a couple more just like it). Do you have any idea how hard it is to cut cardboard? Ouch! I used that ruler (one inch wide–did I mention the man is brilliant?) to make the necessary folds. The pile o’ debris. I did also mention there was a spot of trouble with sides labeled “A” and “B” on the instructable versus the calculator, right? B was able to use that prodigious brain of his to fix the problem without too much difficulty. I love that brain of his, I truly do. :o) And Miss Bitty, of course, saw the scraps from the conversion of the old triangles to the new as cats. Anyone shocked by that? Rather clever of her, really… My pile of folded cardboard. We had both isosceles and equilateral triangles, otherwise known as “large” and “small”. The “small” (isosceles) triangles would be glued together to create pentagons. I don’t think I’ve ever expressed my love of hot glue, but believe me, I do. One of the pentagons completed. The “inside”. After completing all the pentagons, B then glued them together in a long snake-like creature. The house was beginning to take shape, but still needed some filler, which is where the “large” (equilateral) triangles came into play. As you can see, B had a little fuzzy black helper. It would seem he complicated matters somewhat as B was terrified of getting hot glue on him. Well, that, and George objected to being ignored and nipped at B’s feet. :oP I did mention he complicated matters somewhat, right? ;oP We decided the structure was a little too short, and the door a little too difficult to get through as it was, so Brien added rectangular pieces to the base to elevate it some–hence the upside down dome. The last thing he did was “reinforce” (what else would you call it?) the seams with masking tape. We thought it gave a nice decorative effect as well. ;o) I’m sure Lil will have at it with her crayons and markers before it’s all said and done. :oP She certainly created a cozy little hole for her sister and herself. :o) Ellie thoroughly enjoyed her time in the cave this morning (yes, I’m going to refer to it as “the cave” since it’s so stinkin’ dark in there–we could cut windows, but why if the girls like it as is?). Of course, it didn’t hurt that Lil littered it with all sorts of cozy stuffed loveys. :o) Oddly enough, I have no photos of Lil in here. Hm. That must be remedied this evening! If any of you happen to have a truckload of cardboard you would like to get rid of, I’d highly recommend making one of these. It came together over the course of two days with very little difficulty, and it is a hit with all members of the family (well, except maybe Holly…). :o) ************************* Today’s Sparklies: 1. So, now I’m on a sunflower and morning glory kick. So sorry. ;oP The daylilies continue to do their thing, but now the sunflowers are beginning to shine forth in all their sunny glory and I couldn’t be happier. I think I’ve done a fairly decent job having flowers in every month since March. :o) 2. The toe-toes are looking SO good! 3. So, you know how cats like to play in paper bags, right? What happens if they tear through the handle? Poor George, his dignity has been damaged. ;o) 4. The cats have begun to wake Lil up for her to get them brekky. This is a wonderful thing since she loves them SOOOOOOO much. :o) 5. Have I mentioned recently just how in love I am with my house? The new carpet, the new walls, the new entertainment center, all of it. Ahhhhh. :o) 6. Oh, and the fact I culled a large number of toys certainly doesn’t hurt with keeping the clutter down either. In fact, with fewer toys, Lil’s better able to see what she does have to play with and plays better. Does that make sense? 7. And, in case I haven’t mentioned this either, I’m insanely in love with my wonderful husband who is not only an amazing husband, but and incredible Daddy as well. :o) No milestones.

Scottish Deer Hound. Love this breed as much as the Irish Wolf Hounds animals

how to: beach waves for short hair

My grandson will need one of these - this has to go on my husbands project list in the near future ;