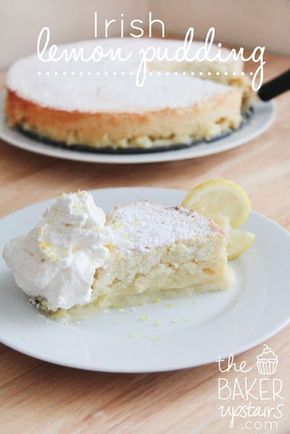 via: www.thebakerupstairs.com
Irish Lemon Pudding Several years ago, my sister in law let me borrow the most amazing cookbook. It’s called Irish Traditional Cooking, and I immediately fell in love with it. When I eventually had to give the book back, I ordered my own copy asap. I can honestly say that I have loved every recipe I have made from it! Now, to be fair, there are plenty of recipes that I have not tried (and almost certainly will never try). Things like offal and cockles just don’t appeal to me that much. :) My favorite recipes so far, though, have been the breads and desserts. I made this lemon pudding for the first time for St. Patrick’s Day in 2008, and I’ve made it many times since. It’s pretty much just delightful in every way. As it bakes, the pudding separates into two layers… a dense, almost caky layer on the top, and a luscious pudding layer on the bottom. I love the mixture of creamy sweetness and lemony tartness. And adding a touch of fresh whipped cream takes it to an amazing new level. I love that it starts with such basic, straightforward ingredients, and becomes such an elegant, decadent dessert. And best of all, it’s really easy to make! Try it, and you’ll love it as much as I do! Irish Lemon Pudding adapted from Irish Traditional Cooking 2 tablespoons butter 1/4 cup sugar 2 eggs, separated 1/2 cup flour 2 lemons, zested and juiced 1 1/4 cups milk Preheat oven to 350. Cream the butter and sugar well. Add the egg yolks one by one, then add the flour. Add the lemon zest and juice, followed by the milk, and mix well. In a separate bowl, whisk the egg whites until stiff. Fold gently into the lemon mixture until incorporated. Pour into a 8-9 inch pie pan or cake pan. Bake for 40 minutes, or until very lightly browned and set. Sprinkle with powdered sugar and serve warm with freshly whipped cream. Note: I like to double the recipe and bake it in a 9 inch springform pan (with a baking sheet underneath, just in case of any drips). I like thicker layers of pudding, and I think it makes for a prettier presentation. Hungry for more from The Baker Upstairs? Facebook | Pinterest | Twitter | Google +

Inspirational- Walk (Run) until your clothes fall off! 3-4 miles per day, 4 days a week, fuel your body with fruits, veggies &

A little boy asked his mother, “Why are you crying?” “Because

binding for a felt quiet book