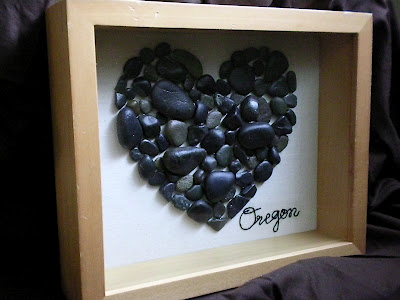 Time spent creating: 2.5 hours (not including waiting-to-dry time. or driving-to-the-beach time!)
Money spent: $8 for spray varnish and E6000 — free if you already have those on hand!

Tutorial, the short version: Arrange and glue spray-finished rocks in your chosen collage shape. Arrange, starch, and glue crochet thread to form the word of your choice. Frame and enjoy.

PART ONE: Creating the rock shape

Draw or trace your desired collage shape on a piece of paper and cut it out.

Carefully transport rocks outside and spray with clear finish. I gave my rocks two thin coats to give them a nice wet-looking sheen.

PART TWO: Creating the crochet thread word  (inspired by MADE and peace love crafts) Please note than an extra measure of patience is required for this part of the creation process.  The method I chose for forming the letters is long and complicated, but it was exactly what I wanted in my crazy perfectionist head. Unless you are also crazy like me, try another method, like those listed at the end of the post.

Trace or write the word(s) you want to frame with your collage. I used a font from my computer because my cursive handwriting is not pretty at all.

Then, all that’s left is to decide where to put the frame. For me, this is the most difficult part of the project!

You can try find out more about
Beach Rocks Souvenir idea

16 DIY Clothes For Teens how to make ideas

How to Build a Raised Bed Vegetable Garden out of Wood

"Every Body Has a Name Poem"