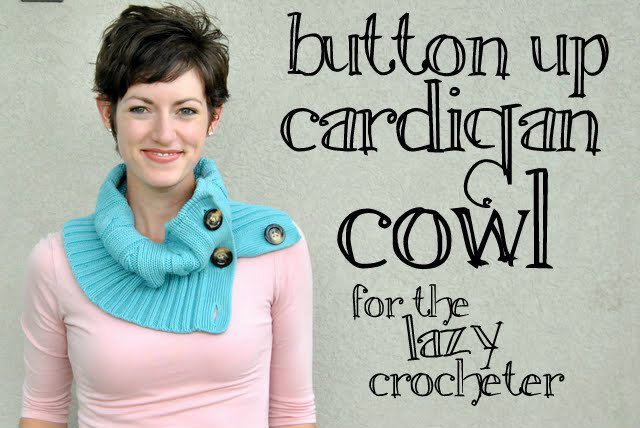 It’s made from an old, unloved cardigan. Don’t we all have a few of those lying around?

My sister gave me this sweater that she bought a few years ago but hasn’t worn in a while: 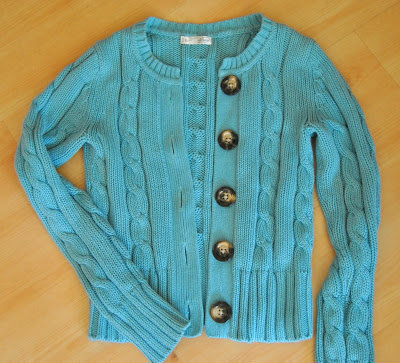 It’s so cute–I love the big buttons, the chunky cables, and the beautiful aqua blue color–but there were a few problems. First of all, it was kind of short and very boxy . . . the feminine figure I’m shooting for doesn’t involve any squares, so I doubted I’d ever wear it. Also, it’s a size XS . . . that’s a size or two away from what I normally wear, so I really doubted I’d be able to wear it as is. I thought a little button-up cowl would be the perfect way to repurpose this sweater! Just grab a cardigan you don’t expect to wear again (the smaller size, the better!) and button it up, then slice it to the length you want it to be as a cowl: 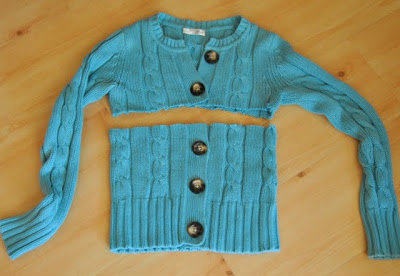 I cut my sweater off about two inches below the armpits. Now, if you have a larger sized sweater, you may want to taper the sides in so it’s a bit more fitted toward the top–just turn it inside out, pinch the side seams together, and sew a new side seam, angling in towards where the neck used to be. Since my sweater was pretty small to start with, I just took the sides in a teeny bit, and even that probably wasn’t completely necessary (and I of course forgot to take a picture of this step).

Set your sewing machine to a zig zag stitch and sew close to the cut edge to prevent it from fraying or unraveling with wear–as you can see, I didn’t sew directly along the cut edge, just pretty close to it to seal the cut side of the knit: 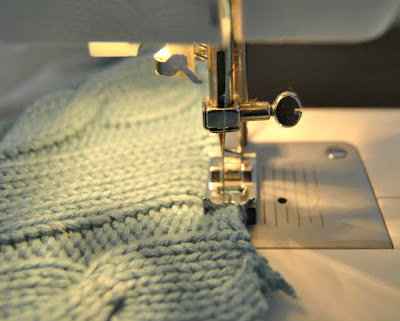 Now fold the cut edge over towards the wrong side of the sweater about 1/2 to 3/4 of an inch, and sew it down with a straight stitch (if your sweater is a thinner knit, I would suggest folding it twicebefore sewing, to hide the cut end–unfortunately, the sweater I used was extremely thick and it was difficult enough to sew through just two layers, much less three if I folded it again!): 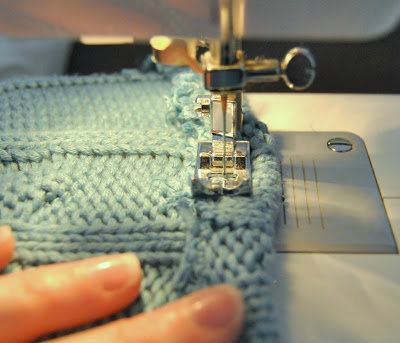 That’s it! I told you it was quick! The trickiest part about this project for me was maneuvering the very bulky sweater through my machine–do your best not to pull or tug as you sew; you don’t want a big stretched-out neckline on your cowl.

It’s even got some versatility to it . . . you can wear it partially unbuttoned to keep your shoulders covered: 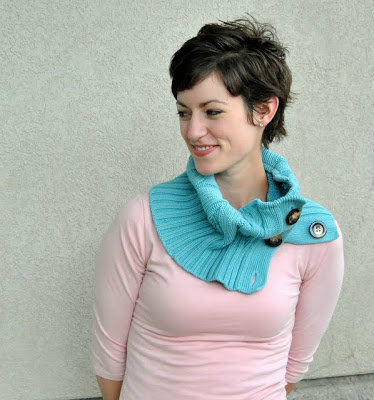 Or button it all the way up to keep your neck extra cozy: 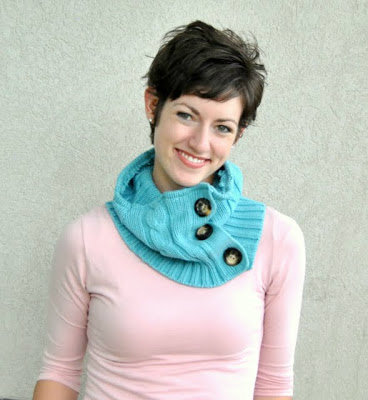 You’ve not only cleared out some closet space, but you’ve got a cute new fall/winter item to wear.

You can try find out more about
How To Cut a Sweater and Secure The Yarn So it Doesn’t Unravel: Button Up Cardigan Cowl (Old Sweater Refashion)

How to Spray Paint Iron Bed

How to attach DIY headboard to frame